The protagonist of William Gibson’s 1981 short story ‘The Gernsback Continuum’ finds himself pulled into an alternative reality in which the streamlined modernist design of the 1930s never went away.

Spotting surviving examples of Art Deco architecture in Bristol can feel rather like that – the shock of a sudden glimpse into a time before the Blitz and the ensuing austerity, when buildings soared, waved and curved into ever blue skies.

The term Art Deco derives from the French Arts Décoratifs and arose in the early part of the 20th century. It was a self-consciously modern movement that drew on diverse inspirations including industrial design and Egyptian art, and employed bold colours, geometric patterns alongside expanses of black, white, pale grey or cream to sell a vision of clean, bright living.

Bristol didn’t go all in on Art Deco, preferring the more conservative neo-Georgian style in many cases, and much of what there was was destroyed by war or progress. Most of the city’s lavish Art Deco cinemas, for example, have been pulled down (the Orpheus at Henleaze) or allowed to decay to their concrete bones like the Ambassador in Bedminster, now a climbing centre. There is still plenty to see, however, if you know where to look. 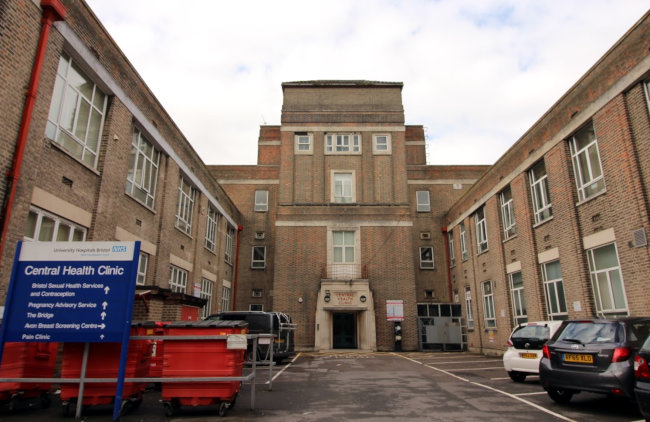 Bristol’s surviving Deco tends to be in the vaguely totalitarian Ministry of Information style, intended to project an image of business-like modernity, not leisurely decadence. The Bristol Central Health Clinic of 1935 by C.F.W. Dening is typical, and easy to miss unless you catch it from the right angle and pay attention to the details. It is composed around a central tower that barely towers, and has geometrically formed text over its defunct doorways – WOMEN PATIENTS and STAFF. 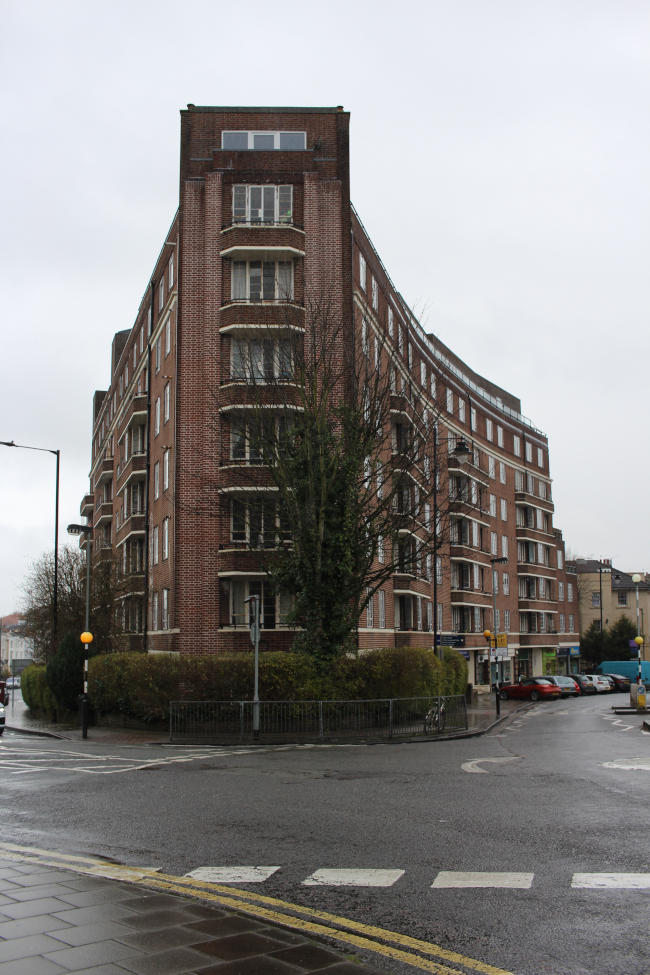 Alec French was an important Bristol architect whose firm is still trading today. His work includes the twin office blocks, Eagle House and St Stephen’s House, that take up most of one side of Colston Avenue. One oddity is French & Partners’ St Nicholas House which looks like pure 1930s Deco but was actually built as late as 1959. Queen’s Court, a block of flats built in 1937, is particularly striking. It resembles an ocean liner in red brick, its prow cutting into the road junction, with balconies turning its flats into seaview cabins. Halifax House on St Augustine’s Parade was built for the building society of the same name in 1937 before becoming once Alec French’s own HQ, and most recently a branch of Toni & Guy. It is quite plain but with distinct Deco touches around the balcony and in the black stone fascia. 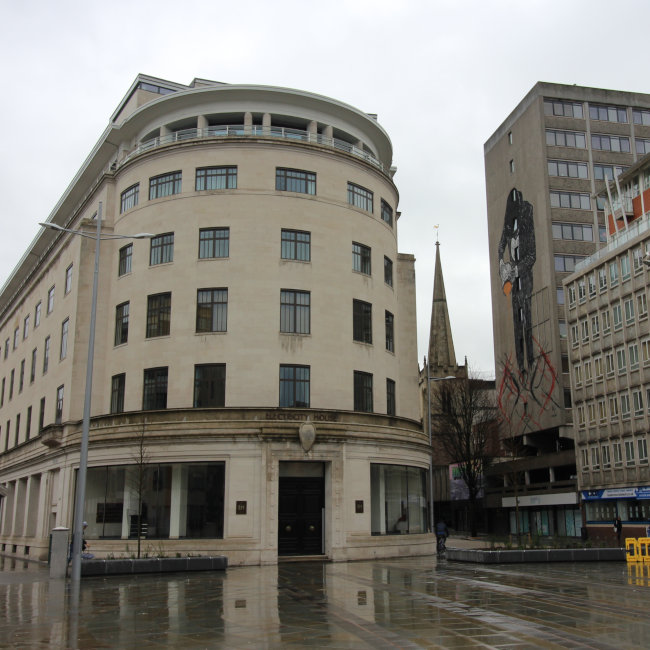 The Centre has more yet. Electricity House is a former showroom of 1937 by Giles Gilbert Scott, perhaps best known for designing Battersea Power Station and the famous red telephone box. Northcliffe House, a former newspaper office built in 1929, has streamline details and a clock tower which states thrusting modernity without subtlety. 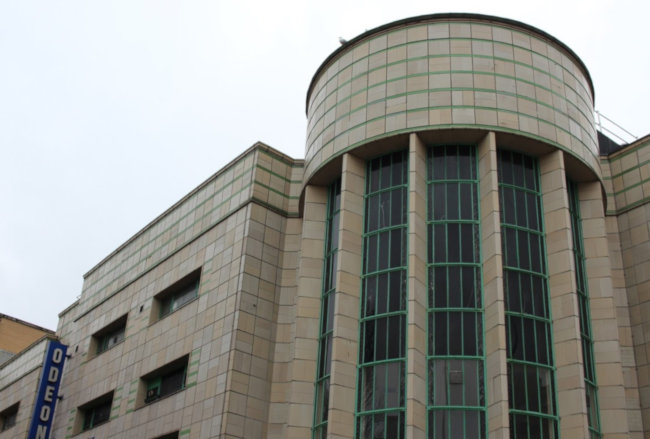 The Odeon at Broadmead is one example of frivolous leisure Deco, decked out in polished green and white tiles, and with a flying saucer canopy over what was once the grand entrance. The Merchant’s Arms at Stapleton, currently closed pending refurbishment or redevelopment, is a rare pub built in the streamline moderne style. In Stokes Croft there’s the former Blundell’s department store by W.H. Watkins at No. 77, much-altered but still unmistakably of the 1930s. The junction of Zetland and Gloucester roads has two minor relics: the former Morgan’s department store (lately Maplin’s) with its minimalist clock-face; and a Sainsbury’s supermarket which, if you look at the details, reveals itself as a branch of Burton’s the tailor dating to 1938. 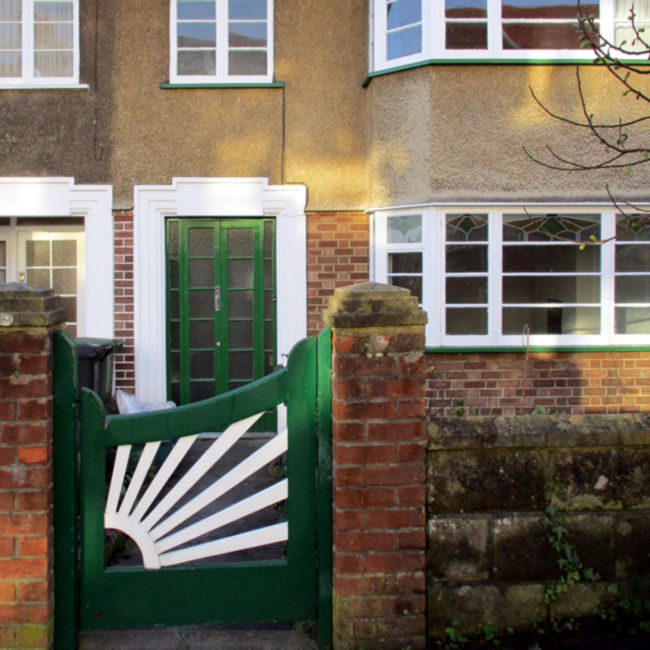 The very humblest examples can be found in residential suburbs. Subtly streamlined semi-detached houses crop up here and there in Westbury on Trym, while Briavels Grove in St Werburgh’s is an entire cul-de-sac of houses with bold geometric door surrounds and sun-ray garden gates. It’s all enough to conjur the sounds of Henry Hall and the BBC Dance Orchestra from a distant radiogram: