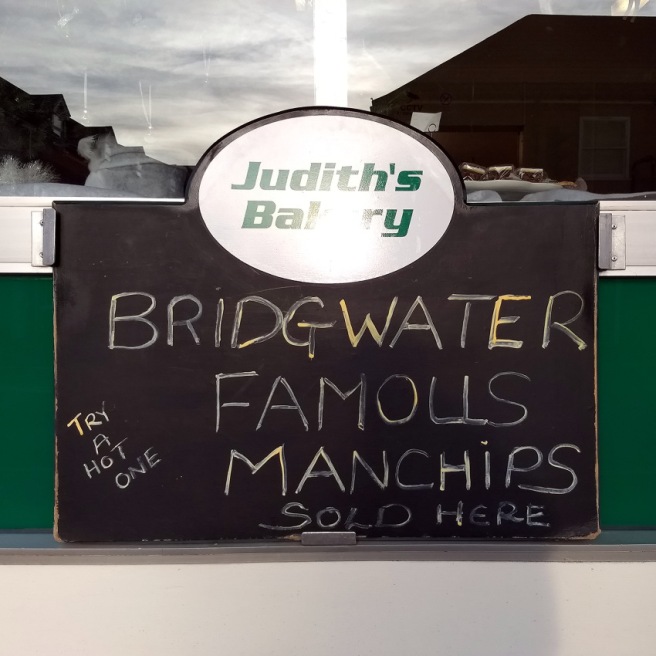 I ate my first manchip when I was around 8-years-old.

Dad pulled up outside in the sky blue Cortina and came running into the house – actually running — holding a paper bag transparent with hot grease. He was shiny-faced with excitement, a rare occurrence in those days of night-shifts, money troubles and headaches.

He said it as if my brother and I should know what a manchip was.

We, thrilled to see Dad thrilled, couldn’t wait to see what was going to emerge from the wrapping.

This was why he’d been in such a hurry: the manchip, we learned, is a dish best served dangerously hot.

There were two in the bag; my brother and I got half each.

What we were presented with was a pocket of flaky, rolled pastry filled with semi-molten jam and dusted with granulated sugar. It was lardy and not especially sweet, the jam a mere smear. It was, frankly, a let-down after all the hype but we played along and ate up while Dad, apparently reverting to childhood for five bites, made yum-yum noises and licked jam off his factory-scarred fingertips.

Perhaps we confessed our disappointment or maybe Dad just guessed but, either way, I never saw another manchip. That is, until December 2017, with my 40th birthday looming, when I made a return trip to the old home town.

Walking up Cranleigh Gardens and waiting to cross St John Street I saw a chalkboard sign outside Judith’s Bakery: “Bridgwater Famous Manchips Sold Here”. Bridgwater’s famous manchips? This being the 21st century I Googled it while I waited for the lights to change and was astonished to read that, yes, the manchip is Bridgwater’s own contribution to the culinary catalogue.

The origins of the manchip, like those of most even slightly interesting things, are vague. They are sometimes also called ‘manchits’ or ‘manchets’, and the Oxford English Dictionary traces the similar ‘manchet’, meaning fine wheat bread, back to the 15th century.

A more obvious Bridgwater connection occurred to me, though: I was at school with several Manchips, and the Manchip or Manship clan has been a prominent one in Bridgwater for a couple of centuries. In fact, if you look up distribution of the surname Manchip in 1881 you find that every single one, give or take, lived in Somerset.

Nobody seems to have pinned down the exact origins of the Bridgwater manchip though Glyn Hughes has tracked down a 1938 reference to lardy pastries using that name which would seem to demolish the popular myth that it was a response to rationing during World War II.

Armed with the variant spellings I was able to find a tantalising reference to ‘french rolls and manchets’ in the precis of an 1885 book about St Mary’s Church in Bridgwater and (this is a bit complicated) an 1899 letter to the Taunton Courier in which a correspondent recalled a Taunton baker, Mr Betty, “famous for the excellence of his breakfast manchips” (20/09). Perhaps most useful, though, is this letter to the Taunton Courier printed on 22 June 1946, which contains reference to the foodstuff itself:

The reference to Manchets in last week’s Herald carried my memory back 50 or 60 years to the days when small boys went through the streets of towns in this part of England very early in the morning, crying “Hot Rolls and Butter Manchets” or “Buttered Manchips” or “Buttery Mansions” or some other variation of the last two words. These Manchets, Manchips, or Mansions were a plain kind of flat dough cake, or tea cake, kept hot, cut open and buttered for breakfast…. [As] far as my memory serves me they were eaten in my young days only, or at any rate mainly, at breakfast time.

That’s odd, isn’t it? No jam. Not notably lardy.

I’m going to keep looking for more information but here’s my current assumption: ‘manchip’ was being used to describe a kind of fancy roll in Somerset during the 19th century but its use dwindled until it was reinvented during or after World War II as something sweeter and more pastry-like.

Regardless of its origins, my second ever manchip, eaten hot on the platform at Bridgwater station as I waited for a train back to Bristol, was delicious – fat slicking the tongue, just enough fruit acid to tame it, and flakes of pastry falling like gold leaf around my feet. Once I’d dusted myself down and wiped my fingers on the paper bag, I knew I owed Dad an apology.

One thought on “The Famous Bridgwater Manchip”