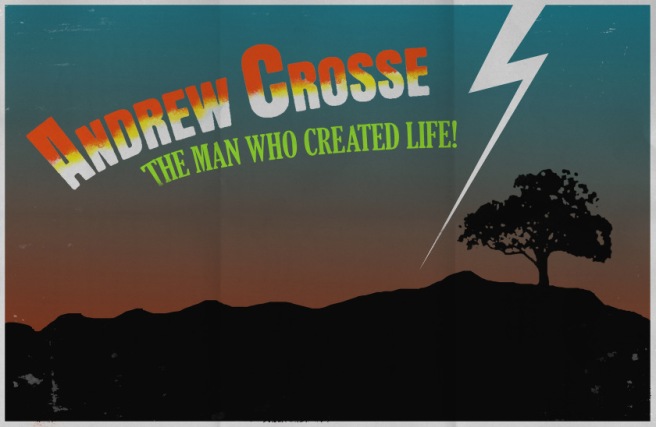 A gentleman scientist fills a laboratory with primitive electrical equipment and, through experiments considered blasphemous by his peers, summons life.

This is the plot of one of the elemental gothic horrors, that’s true, but it is also something that really happened, not among the romantic mountain peaks of Mitteleuropa but on Somerset’s Quantock Hills. And the scientist was not a doomed young Byronic hero but a distinctly middle-aged Englishman called Andrew Crosse.

Crosse was born  in July 1784 at Fyne Court, a country house built by his family in 1620s on the edge of the Quantocks between Bridgwater and Taunton. Though now we now think of the Quantocks as a landscape dominated by conifers it was then covered with ancient woodland, its heathlands bright with yellow furze and purple heather, pockmarked here and there with sandstone and limestone quarries, and richly populated with deer and other game animals. A place of ‘free, wild solitude,’ in the words of Crosse’s biographer, his widow Cornelia.

Andrew’s father, Richard, was strict to the point of being intimidating and though his mother cooed over her ‘little Andrew’ his parents sent him away to board with a tutor in Dorchester at the age of six. There he learned Ancient Greek, oddly before he had learned to write English, before moving on to a school in Bristol at the age of eight.

In Bristol, on a grim diet of black potatoes and ‘hashed mutton’, he developed an fascination with fireworks and electricity. His father had known the famous electrical experimenter Benjamin Franklin and perhaps that laid the foundations of his interest, but the real spur to action was a lecture he heard about at a tavern where he had got into the habit of taking meals to avoid the dreadful school dinners.

A school friend, John Jenkyns, provided Cornelia with a note for inclusion in her biography which recalled what came after that formative experience:

I dare say he has mentioned to you our first joint attempt in the science of electricity, and the wonderment occasioned to a circle of school boys by giving them a shock with a Leyden phial… charged by a broken glass of a barometer…

Crosse and Jenkyns used this contraption to tease – or, let’s be honest, bully – younger boys who were marched up to a terrifyingly gothic witch-like figure sitting next to a box. (The witch was Crosse in costume.) Inside the box there was a depiction of hell with a devil dancing in front of it, pitchfork in hand. (A clever trick in itself: the figure was hanging from a single human hair.) The little lads were made to look at this macabre scene for a moment before the jar was discharged, giving them a physical jolt to match and intensify the psychological one. (At my school the bullies just gave you a dead arm in the corridor but this is presumably what you’re paying for with private education.)

Crosse left Bristol for Oxford in 1802 taking with him an ‘electrical machine’ that he had acquired from a ‘philosophical instrument maker’, and a hunger to learn more. After university he returned to Somerset and made an abortive attempt to study law while, now orphaned, he also managed the family estate. His true fascination could not be resisted, however, and he soon had a new electrical apparatus to play with – a huge cylindrical electrostatic generator attached to a battery made up of 50 Leyden jars. This machine was made by his friend George Singer, another electrician, as such scientists were then known, though the word now refers to a specific, less glamorous trade. They would spend all day running electrical experiments together and then, in the evening, walk on the Quantocks engaged in intellectual debate.

In around 1807 Crosse was inspired to begin a new line of investigation. He kept finding himself drawn to Holwell Cavern, a fissure in the limestone rock the roof of which was covered in star-like Aragonite crystal formations caused by the dripping of mineral laden water through the rock. A true man of the Romantic age, he of course wrote a poem about the cave, which begins:

Now pierce the hill’s steep side, where dark as night
Holwell’s rude cavern claims the torch’s light;
Where, breathless, dank, the fissure cleaves in twain
Th’ unchisell’d rock which threats to close again,
And swallow in its adamantine jaws
The bold explorer of creation’s laws.

Crosse later said: “I felt convinced at an early period that the formation and constant growth of the crystalline matter which lined the roof of this cave was caused by some peculiar upward attraction; and, reasoning more on the subject, I felt assured that it was electric attraction.”

He took water from the cave and, back in his lab at Fyne Court, connected it to a battery and ran a current through it. Nothing happened for days and he was about to give up when, after almost two weeks, he spotted sunlight glinting on crystals that had grown on one of the wires.

In the years that followed, he married, had children, and continued working on his ‘electrical poem’. He argued politics and philosophy with his brother Richard, and travelled to Plymouth where, from the deck of a hired boat, he caught a glimpse of Napoleon Bonaparte imprisoned aboard HMS Bellerophon.

He also continued his experiments, constructing an ‘atmospherical conductor’, a copper wire of about a mile in length which he used to attract lightning during thunderstorms and bad weather, creating ‘terrific… noise and brilliant light’. Crosse himself described how one experiment created “explosions… [and a] stream of fire too brilliant to look at”. Calmly harnessing the power of the atmosphere he used the electricity to boil liquids, fuse metals and cause fires. Locals would turn up at Fyne Court and ask to be zapped to cure their various ailments which, according to Crosse, sometimes worked. It is easy to see how this kind of experiment inspired the modern vision of the mad scientist.

As recounted in Brian Wright’s 2015 biography, it was Singer who convinced Crosse to talk at one of the regular lecture events hosted by the parachutist, balloonist and showman-scientist André-Jacques Garnerin at a London theatre. On the night of Crosse’s lecture on 28 December 1814 two more famous figures from history happened also to be present: Mary Shelley and her husband, the poet Percy Shelley.

We know from her diary that Mary took note of Crosse’s lecture, whether she paid attention to its details or not. A year and a half later, at the Villa Deodati on the shore of Lake Geneva, she would write her most famous book, Frankenstein. Did Crosse inspire Victor Frankenstein? Perhaps partly, or perhaps Frankenstein inspired Crosse, because back in the peace and quiet of Somerset he continued his experiments into batteries and crystallisation in relative obscurity for another 20 years, long after Mary Shelley’s book had become a bestseller.

Crosse was in his early fifties when an accidental discovery, and the equally accidental announcement of its results, brought him fame or, rather, infamy. In 1837 he carried out a month-long experiment attempting to grow crystals by electrifying a chunk of porous volcanic stone. On the 26th day he observed what looked like insects. Then, on the 28th day, to his astonishment, he saw them wiggle their legs. A few days later they wriggled free and began to move around the frame where the experiment was being conducted. They were, Crosse concluded, mites of the genus Acarus, and there were soon a hundred or more, some with six legs, others with eight. Where had they come from? And how on earth were they surviving in an acid solution?

Crosse mentioned this odd occurrence to some friends in what he thought was private conversation but one of the group was the editor of the Somerset Gazette and couldn’t resist running an account of the experiment. That article was picked up and reproduced or quoted in newspapers across the country, usually under the headline EXTRAORDINARY EXPERIMENT.

Outrage commenced almost at once. Who did Crosse think he was, claiming to have created life, and bragging everywhere about his amazing discovery which was obviously a complete con? Crosse was hurt by those accusations: he hadn’t made any such claims and certainly hadn’t sought to publicise his experiments. He was blamed for crop blight and received a letter calling him “a reviler of our holy religion” – in other words, he was accused of playing God.

For another decade he and other scientists attempted to replicate the results, often with success, but without reaching any convincing conclusion. Was the electricity reviving fossilised insect material in rocks or soil? Was the water contaminated, or the apparatus? Or had Crosse really discovered the secret to summoning life?

These days, the consensus is that the equipment probably was dirty — inevitable, almost, in those days of imperfect sanitising techniques. Hardly the stuff of legends, and Crosse certainly did not go on to ‘create’ any more substantial form of life such as, say, a murderous, misunderstood monster created from cadavers rifled from graveyards.

Even though Shelley wrote her novel twenty years before Crosse’s mite experiments, and though in reality the links are tenuous, in recent decades the connection has become indelible, and it is probably fair to say that the Thunder & Lightning man owes his lasting fame to Mary Shelley. Peter Haining, that master of the fun but unreliable horror-history hackjob, called his 1979 book about Crosse The Man Who Was Frankenstein which, clearly, he wasn’t. And, well, I’ve done it here, haven’t I?

There is something irresistible about the idea of so macabre a fiction having any basis in reality, especially when that reality occurred in the wooded hills and heathland of Somerset where the red deer roam.