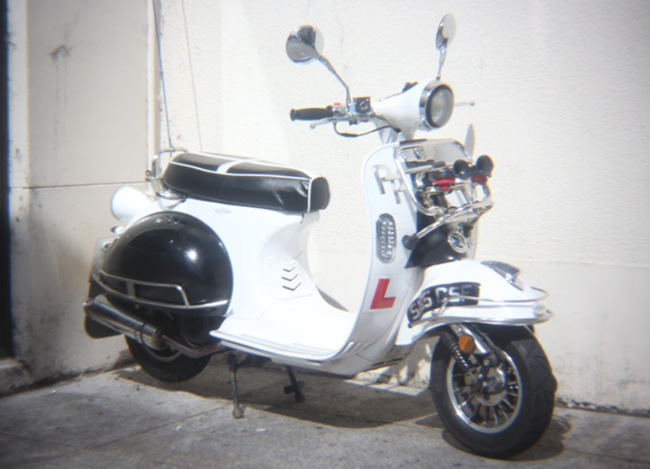 “Modism, Mod living, is an aphorism for clean living under difficult circumstances.”

For a few years as a teenager and twentysomething I tried to do the mod thing but it didn’t really take. Practical modism requires a certain arrogance I don’t think I have, and certainly don’t know how to project.

It’s relatively easy to do ‘plastic mod’, buying items of uniform off the peg at mod shops, but real mods will let you know that’s not the point: you have to really like fashion, really care about sweaters, really commit to having a ‘hairdo’. Doing it properly, or even half-heartedly, takes a fair amount of money. And, ideally, you also need to be slim – a straight streak with no lumpy protuberances to spoil the cut of your suit.

So, all of that being out of reach, I let it go, though I still thrill at the sight of a Lambretta and listen to all the right music.

Looking back, though, I wonder if the appeal of modism to me, and perhaps to other young working class people, was something beyond the clothes, records and scooters: it was the clean precision of it all.

When I got together with my partner about twenty years ago this week she was into grunge and the scuzzier end of indie, at home in festival fields. Not long after we met one of her friends described me as “a clean boy”. It was not intended as a compliment, in my view – she meant to say that I was a bit boring, a swot. But it was true, in literal terms: I don’t like to be muddy or sweaty; ‘slumming it’ holds no thrill for me; I like clean socks, clean shirts, clean bedclothes, and being clean shaven.

I think I understand this instinct of mine. A council estate upbringing is almost the textbook definition of the “difficult circumstances” described by Peter Meaden, the original Ace Face and associate of The Who, in a 1978 interview. “Clean living” is the smallest, cheapest unit of defiance. (Disposable razors can be used multiple times if you dry the blade after use; a bar of soap lasts longer than shower gel and costs buttons.)

Later on, at university, it was a way of feeling in control of a distressing situation. Scrubbed clean, dressed and out of the door every morning before many of my peers had even thought about sliding out of bed and into last night’s T-shirt, I at least started each day fresh and sharp. One of the few things from Cambridge I look back on with any fondness are the bathing facilities: constant scalding hot water delivered via showers like firehoses, or cascading into luxuriously deep Edwardian tubs. The industrial laundry facilities weren’t bad either.

But I have to admit there was also a cringe in all this. It was a way of saying, “Yes, I might be here now, but my soul and body has already begun the ascent to a better place.” If I smelled of anything at all, or had a dirty collar, I subconsciously believed I would be marked out as a ‘prole’.

Of course my up-tightness did that far more effectively, and I daresay continues to do so.